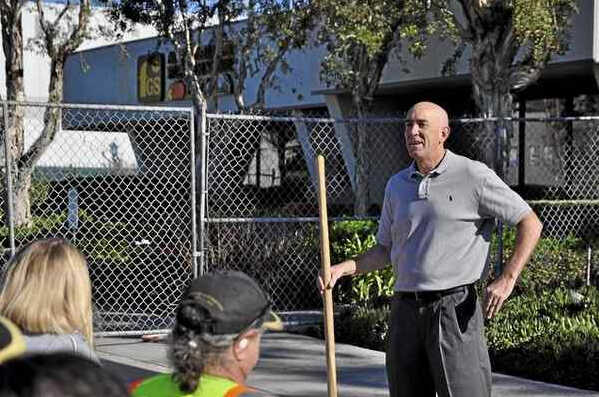 Mark Lindgren, president of Fruit Growers Supply Co., speaks to staff about the expansion of the Ontario location. Photo by Grace Wong

Despite the chilly wind that threatened to blow over some trees, members of Fruit Growers Supply Co., sat outside and talked excitedly about the expansion of the building which celebrated its groundbreaking Tuesday.

The Ontario location of FGS was built 36 years ago and focused on making boxes for Sunkist at 225 S. Wineville Ave.

Tim Lindgren, the president of FGS at the time, attended the groundbreaking. His son, Mark, is currently the president.

“There’s a lot of emotion and feeling,” Lindgren said. “I’m glad that they’re doing so well that they’re going to expand. At that time, almost everything we did was for Sunkist, and Sunkist in those days used to use over 90 million cartons a year. They don’t have as much now. So they started to go out and sell to other companies and that’s what this is all about: expanding the plant and putting in equipment to make cartons for other companies.”

The $30 million expansion will add in new equipment and 8,900 square feet of space, 2,500 square feet dedicated to staff resources like a design room or a training room.

“Originally it was placed here because it was center of the Sunkist business but since then, the center has moved toward the north toward the San Joaquin Valley,” Mark Lindgren said. “A component of it was financial, that expanding was more economical than rebuilding and moving into a new location. However, more of the overriding factors is the staff that we have here.”

Mark Lindgren said many of the staff working there had been with the company for more than 20 years, and their expertise was the deciding factor for expansion instead of a relocation.

“We want to leverage the existing human resource,” he said. “They really have proven over many, many years that they’re a great workforce that we can count on that will be able to learn the new technologies that we’re moving into the new plant. Rather than growing from the ground up, we’d rather re-invest into that group of people. The area has always worked well for us. The city has worked well with us over the years so it’s been a good place and for all of those reasons, we’d rather reinvest in this area and in our existing staff than pick it up and start somewhere else.” 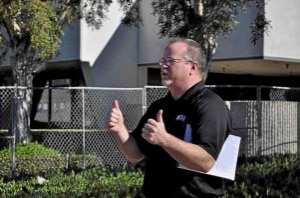 Steve Moore, general manager, came to the company in March and went over the business plans for the expansion. Moore agrees that the staff was the main reason why the company chose to expand rather than relocate.

“It’s a unique place,” Moore said. “It’s a great opportunity. The people here are unique, and they take pride in what they do.”

With a bit of force, Mark and Tim Lindgren stuck their shovels in a mound of dirt to signal the beginning of the expansion. The project is anticipated to be completed in September.