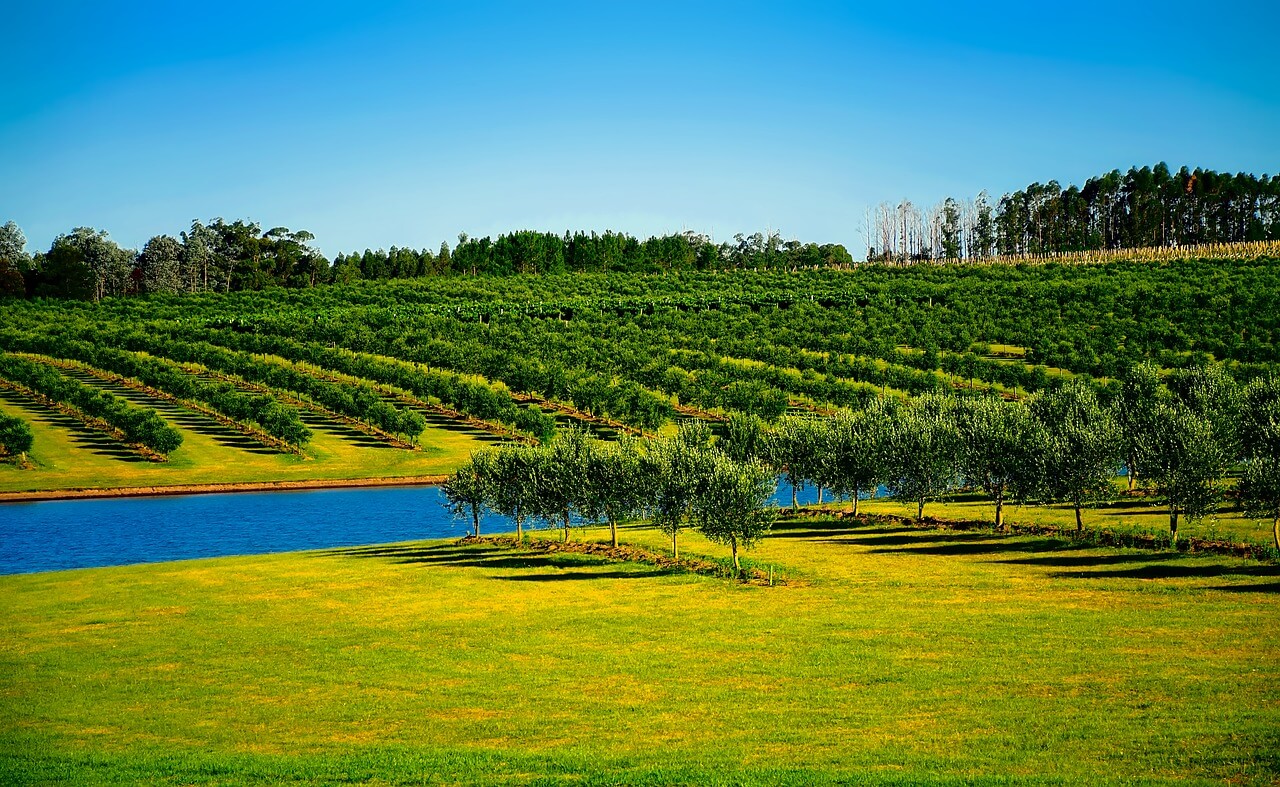 The different types of irrigation systems for agriculture each come with advantages and disadvantages, and some are more appropriate for certain crops than others. Read on to learn about irrigation techniques for fruit trees and row crops, drip irrigation for vineyards, and how to maximize your water use.

The primary advantage of surface irrigation is that it requires the lowest capital investment and little or no technical know-how. It is also the most energy-efficient method on sloping fields because there is no need for electrical pumps or factory-made pieces and parts. Where the soil drains freely, surface irrigation techniques may allow for some of the water to filter back down into underground aquifers. In this case, the soil structure, roots, and rocks underground work to filter the water naturally.

Surface irrigation is the most water-intensive type of irrigation system for agriculture, as only a small percentage of the water reaches the roots while the rest flows past through the system of furrows. The temporary saturation of the soil reduces the soil’s ability to absorb water, making intermittent applications of water a far more efficient approach. The other main disadvantage compared to drip irrigation in a vineyard, field, or orchard is the potential for contamination. If the water source or plants uphill are contaminated or diseased, these problems may spread to the plants in the rest of the field.

The second most common type of irrigation system for agriculture is sprinkler irrigation. This method uses hoses, pipes, and pressurized sprinkler heads to apply water to the soil from above in a circular, rectangular, or lateral pattern. Because the water sprays down from above, sprinkler irrigation can be used for flat, undulating, or sloping areas, making it one of the most versatile types of irrigation systems for agriculture. The use of hoses also allows the water to be filtered before use.

Sprinkler irrigation uses far less water than surface irrigation and can be used on a greater variety of terrains. The grower can also program the sprinkler head to turn on and off at certain intervals to maximize filtration and reduce the amount of water used.

While sprinklers may be helpful for irrigating row crops, they are not a particularly helpful kind of irrigation for fruit trees as the trunks block the path of the spray. Water applied with sprinkler irrigation is also highly vulnerable to evaporation as a large percentage falls (and subsequently evaporates) off the leaves.

Micro-irrigation or drip irrigation is the most efficient type of irrigation system for agriculture. Using a complex network of soaker hoses, pipes, timers, and even sensors, water is applied directly to the soil where the roots of the plants would benefit most. When sensors are used, information about the level of moisture in the soil is passed to a central hub which then activates or turns off the pumps. This results in the highest precision and smallest amount of water used.

Drip irrigation in a vineyard or orchard can increase efficiency significantly compared to a basin-and-furrow irrigation system. It also prevents diseases from being passed from one plant to the next, as the water is supplied directly to each plant. If liquid fertilizers are used on the crop, these liquids can be mixed in with the irrigation water to the correct ratios and supplied directly to the soil where needed.

Compared to sprinklers and surface irrigation, micro-irrigation is the most high-tech type of irrigation system for agriculture and requires the most capital to set up. It also requires a technological learning curve if sensors and software applications are used. To assess the break-even point of installing such a system, the grower can weigh the cost of set-up against the long-term savings in time and water. If the irrigated area is large and water is scarce, the system should soon pay for itself.

Fruit Growers Supply Company has been working with California growers for over a century and understands the challenges of irrigation for fruit trees and row crops in our climate. To help growers meet energy-efficiency and water-saving goals, we design, install, and maintain customized solar commercial irrigation systems that are specifically designed for the crops that you grow. If you would like to find out about the best types of irrigation systems for agriculture in California, contact us for a site visit and a free no-obligation quote.