The Fruit Growers Supply Company traces its origin to the late 1700s when Spain’s Franciscan fathers began establishing missions in California. In 1804, the fathers at Mission San Gabriel, near present-day Pasadena, planted a small grove of orange trees. In 1831, fur trapper William Wolfskill came to California from Taos, New Mexico, in search of beaver. When his trapping venture failed, he settled near the center of today’s Los Angeles and planted a few orange trees using seed from the mission. 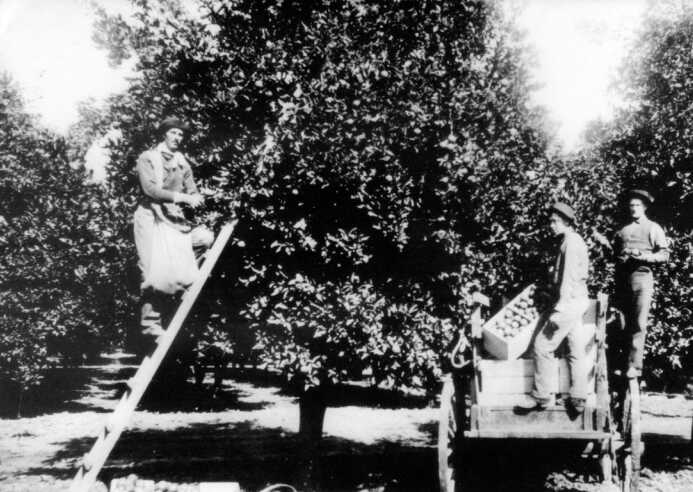 By the beginning of the twentieth century, citrus fruit growing had become one of California’s major industries.

By 1857, Wolfskill was California’s largest commercial grower of oranges. In 1877, his son, Joseph, sent the first rail shipment of oranges to the east. With eastern markets opened by transcontinental rail and the introduction of improved varieties of oranges, the state’s citrus industry burgeoned. Between 1880 and 1893, the area planted to citrus grew from 3,000 to more than 40,000 acres.

A faulty distribution and marketing system, however, brought the growers to near ruin. Agents controlled the process of picking, packing, and shipping. Some markets became glutted with fruit while others had none. When the agents began shipping on a consignment basis, the growers had no guarantee of a sale when their fruit left the orchard.

To combat the situation, a group of orange growers formed a cooperative called the Southern California Fruit Exchange in 1893. The exchange’s concept relied on district exchanges. Within each district, local associations would pack the fruit. Fruit picking would be prorated among the grower-members to give each an equal chance at delivery, and sales orders would be prorated among the associations. 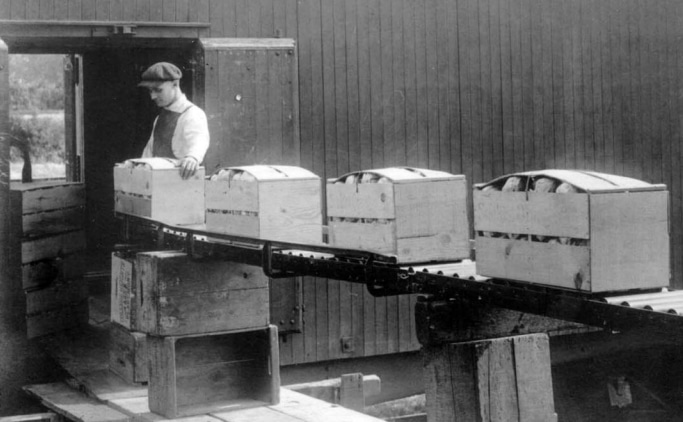 Wooden boxes, each filled with seventy pounds of oranges, are loaded onto a rail car for shipment.

The exchange expanded first by allowing lemon growers to join, and then in 1905, allowing growers from the southern San Joaquin Valley in. After the second group joined, the organization became known as the California Fruit Growers Exchange. Its 5,000 grower-members represented forty-five percent of the state’s citrus industry.

The exchange’s growers shipped their fruit to market in wooden boxes made with box shook. Box shook was the term used for the sawn material used to make the boxes. It was produced from fine-grained ponderosa pine and sugar pine lumber. At box factories in California’s pine region, suppliers cut thin slats and thicker box ends from kiln-dried lumber. The suppliers bundled the shook and shipped it to the growers’ packinghouses where workers assembled and nailed the shook into boxes. The sturdy containers protected the fruit from damage during shipping.

A year after the formation of the California Fruit Growers Exchange, its members faced a crisis. Wood products fell into short supply and prices soared as San Francisco began rebuilding following the city’s devastating earthquake and fire of April 1906. The exchange’s growers needed almost seven million boxes a year, and a cartel controlled ninety percent of California’s box shook the industry. After the earthquake, the price of shook nearly doubled, rising from 121 ⁄2 cents to 23 cents per box. 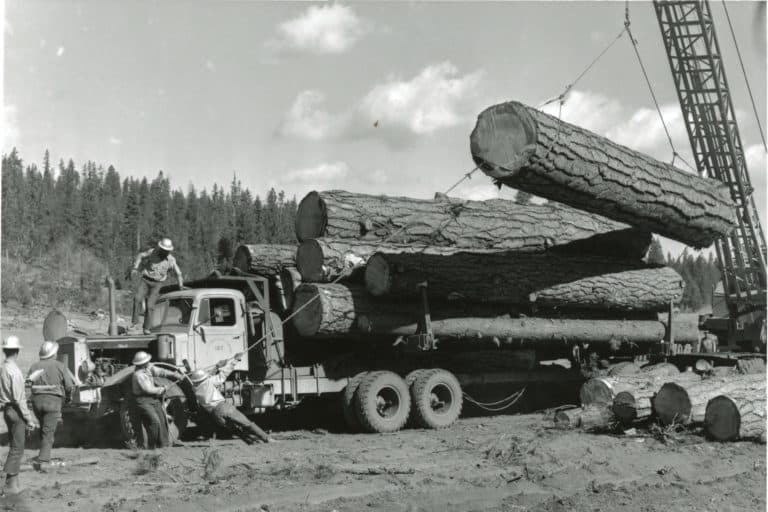 In October 1907, the exchange’s board of directors took action to protect their growers. They formed the Fruit Growers Supply Company as a separate corporation. As stated by the board, a principle objective of the new firm was to secure “supplies for packing fruit and especially box shook at a minimum cost.” While continuing to buy box shook from outside suppliers at market price, the new company, under the direction of Phillip C. Daniels, contracted with four producers to supply shook at 131 ⁄2 cents per box. Fruit Growers, as the firm became known in the industry, provided secured loans to three of the producers. They included the Northern California Lumber Company with facilities at Hilt, near the Oregon border.

In 1910, the Hilt firm defaulted on its loans. Fruit Growers took control of its assets, which included sawmills, a box factory, a logging railroad, and 24,000 acres of timberland. Fruit Growers rebuilt the manufacturing facilities and added new employee housing, a company store, and a hospital. By 1912, the Hilt operation was producing enough high quality pine lumber and shook for nearly nine million boxes per year.

During World War I, forest products again fell into short supply. The price of shook from outside suppliers rose to 33 cents per box. With California’s orange groves covering nearly 150,000 acres, the exchange’s need for almost fifteen million boxes per year far exceeded the capacity at Hilt and placed additional pressure on outside supplies. In 1919, Fruit Growers acquired 41,000 acres of timberland in northeastern California and selected a site for new facilities at nearby Susanville. By the time the new sawmill and box factory began operations in 1921, the exchange represented 10,500 growers who produced three-quarters of the citrus fruit in the United States. 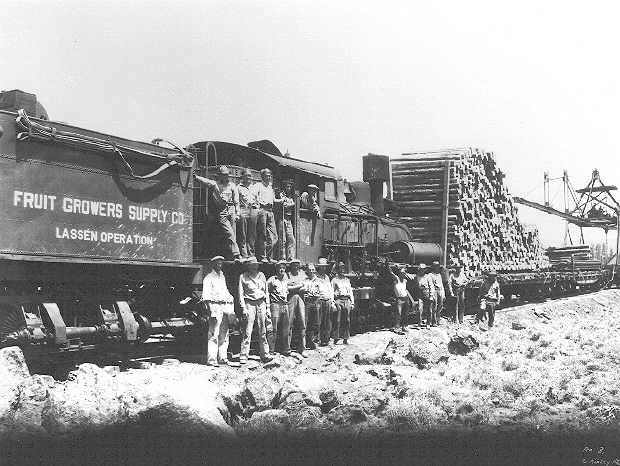 By 1941, the exchange’s growers required forty-three million boxes per year. World War II brought supply shortages once again. The shortage was compounded when the Red River Lumber Company, a major supplier to Fruit Growers, closed its box factory at Westwood, California. Nonetheless, Fruit Growers increased the harvest on its lands, added shifts at the Susanville facilities to produce more boxes, and began searching for new long-term supplies. They found a property of interest near Burney, California—a Red River tract of 83,000 acres. Red River, however, made the property’s acquisition contingent on the purchase of the company’s assets at Westwood. They included a large, old sawmill, a veneer plant, and a supporting company town. Fruit Growers did not want another town or sawmill only 30 miles from its facilities at Susanville.

The negotiations dragged on for a year. When Red River added 9,400 acres of timberland near Westwood and cutting rights to more timber to the deal, the companies came to terms. The transaction was completed in February 1945. Fruit Growers promptly reopened the Westwood box factory. Its eleven million boxes per year added to the production at Hilt and Susanville, and provided the exchange’s growers with eighty-two percent of their needs.

By then, Fruit Growers had become typical of the few large, vertically integrated forest products firms like the Diamond Match Company and the McCloud River Lumber Company then operating in California’s pine region. Though logging trucks were coming on the scene in the 1940s, company locomotives still pulled trainloads of logs to the mills. Company loggers lived in remote logging camps and enjoyed lavish cookhouse meals. Mill workers lived in comfortable housing, bought their supplies at company stores, and sought treatment at company hospitals. 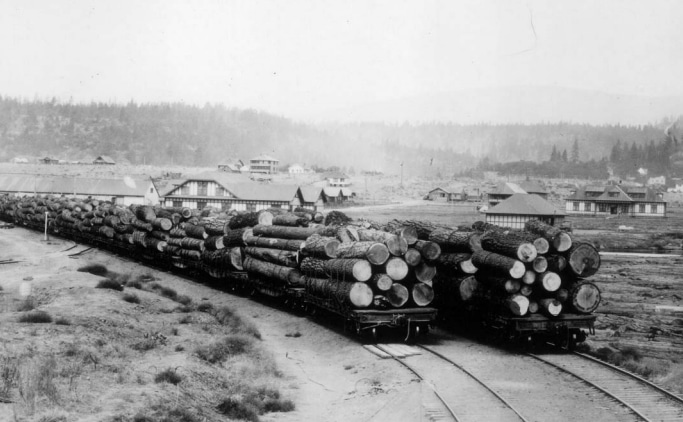 Train loads of ponderosa pine logs wait to be unloaded at Susanville’s log pond. About one-half of the lumber from logs such as these was used to produce shook for boxes.

Since its founding, the company had lived by the principles expressed in 1918 by M. H. Grover, Hilt’s resident manager:

“We are great believers in the idea that a man must be contented to be an efficient worker.”

After citing the amenities provided COURTESY OF MARGARET A. PURDY employees at Hilt, he stated,

“We are convinced that our efforts to make our living and working conditions more attractive have been paid back to the company many times in increased efficiency and commitment.”

The 1950s, however, brought dramatic change. In 1951, some of the exchange’s growers began shipping fruit in cardboard cartons. Though considered by some to be a passing fad, Fruit Growers nonetheless began contracting for a supply of the cartons. A year later, the California Fruit Growers Exchange changed its name to Sunkist Growers, Inc. The new name actually dated to 1908, when “Sunkist” became a trademark for placement on the boxes of the cooperative’s best grades of fruit. 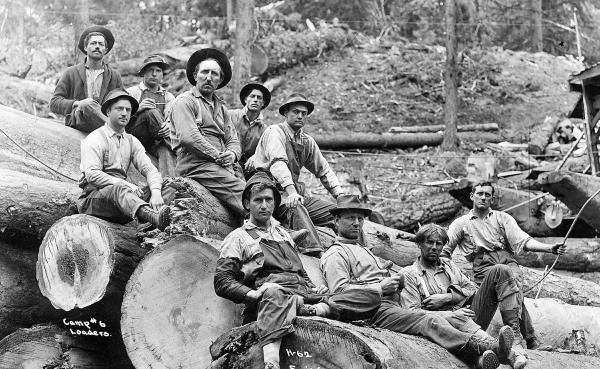 Despite inroads by cardboard cartons, Fruit Growers converted the Westwood veneer plant to the production of Craveener in 1954. This product used white fir veneer overlain with kraft paper to produce boxes more cheaply than those made with box shook. Concurrently, Fruit Growers awarded the McCloud River Lumber Company a thirty-year cutting right on the once coveted timberlands near Burney, where Fruit Growers planned to build a Craveener plant. McCloud agreed to deliver white fir logs to the new facility.

By 1954, however, cardboard containers comprised forty-three percent of the growers’ shipping containers, reducing the demand for box shook. The use of cardboard cartons, which had only half the capacity of wooden boxes, helped mechanize packinghouse operations. Self-serve retailers preferred the lighter weight containers. The Susanville box factory closed in 1954, and the next year, the production of box shook and Craveener at Westwood was discontinued. Plans for a Craveener facility near Burney were abandoned. In November 1955, Sunkist announced that all future shipments would be in cardboard cartons.

No longer required to be a primary manufacturer, Fruit Growers began liquidating its mills, logging equipment, and supporting facilities at Westwood and Susanville. In 1961, the company established a carton manufacturing plant near Los Angeles that still provides containers to Sunkist’s growers. The box factory at Hilt continued producing boxes used in fruit picking and storage until 1961. The Hilt sawmill closed in 1973. 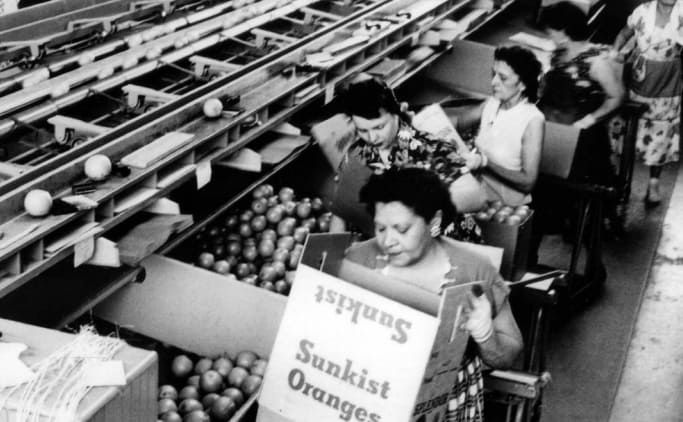 Cardboard cartons replaced wooden boxes as the shipping container of choice in 1955.

Even though the company closed its manufacturing facilities, Fruit Growers chose to retain its timberlands. The company’s timber resources had long been conservatively managed. In 1937, General Manager A. E. Barnes had succinctly expressed the company’s land ethic:

“The policy of this company must be to conserve its timber to extend so far as possible for the protection of its members.”

Although the protection he referred to then was about assuring a supply of box shook, the Fruit Growers Supply Company believed that the continued management of its timberlands under this ethic would provide financial benefits to Sunkist’s growers well into the future.

Today, Fruit Growers owns 280,000 acres of timberland in California. Included are the lands first acquired at Hilt, the later acquisitions at Susanville and Burney, and properties purchased from International Paper Company in 1982. In 1998, the company began acquiring lands in the Douglas-fir region in Oregon and Washington that now total 60,000 acres. The sustainable annual harvest is marketed to lumber and plywood firms. Each year, the timberlands’ earnings are distributed to Sunkist’s growers.

When the Fruit Growers Supply Company entered the scene in the early twentieth century, lumber companies such as Diamond Match, McCloud River, and Red River dominated California’s pine region. These firms no longer exist. But the firm that dates to colonial-era mission fathers, an itinerant fur trapper, and an earthquake remains.

Published by: Ted Wilson at ForestHistory.org
He wishes to acknowledge the use of material from Tim I. Purdy’s book, The Fruit Growers Supply Company